Heading to Munich for Oktoberfest? You’re going to have the best time! You’re probably wondering what beer tents (in German: festzelt) to check out at the festival, or which are the best tents at Oktoberfest. There are more than 10 giant tents on the festival ground, and unless you’re there for a week, you might not get time to check them all out. So here are my tips for the tents you need to pop your head into. I’ve put together a list of my top five beer tents, and a few other recommendations of where to go in the festival.

These five Oktoberfest beer tents are huge, international, have a great vibe, and they’re not exclusive, so you’ll have no trouble getting into them if you get to the festival early enough. Of course, all of these tents serve gorgeous golden Bavarian beer, and you’ll have a wild time in any of them. If you’re at Oktoberfest for a few days, I’d recommend checking out as many of them as you can! Prost! 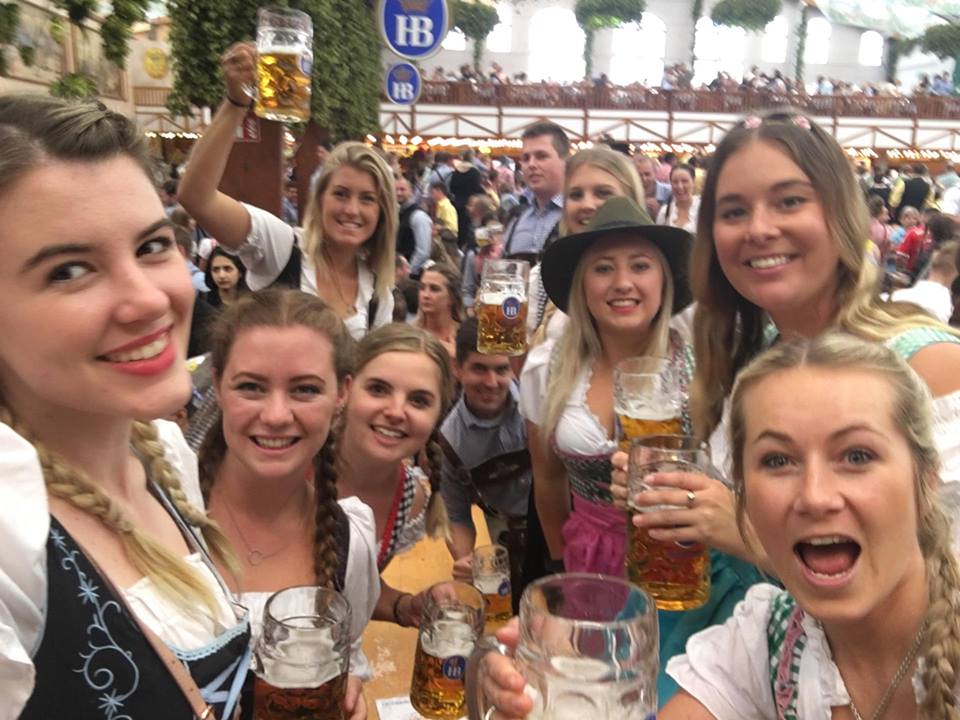 Let’s start with the biggest – the Hofbräu tent. It’s wild, it’s full of drunk Aussies, and it’s a huge party. Hofbräu is actually aesthetically pretty as well – the entire roof has garlands of hops (the stuff you make beer from!) hanging from the roof. The music here is cheesy and international. This is the tent you come to if you want to get drunk, sing along to Country Road (probably 3 times in one day), meet lots of other international travellers, and don’t care about getting messy. The food here is pretty standard Bavarian fare, and on the opening day we actually found it got too chaotic to order food (so don’t make our mistake, and fill up on pretzels).

This tent was recommended to me by my Munich friend, who told me it’s the tent the young locals go to. It’s also the prettiest tent, with a bright blue sky covered in clouds. The slogan of the beer here means “Heavens of Bavaria”, and you can see why. This is definitely the tent to get a cute snap in! We ran into a lot of mid-twenties, drunk Germans here, so it’s less international than the other tents. Sometimes, you just want to get away from all the Aussies, right? And the Hacker-Pschorr beer is probably my favourite.

A good tip for all my veggie friends – there were three vegetarian options and even a vegan option at the Hacker-Pschorr tent! Below you can see the Käsespäztle I had, and the vegan spinach and potato with tomato sauce patties that my friend had! Yum. 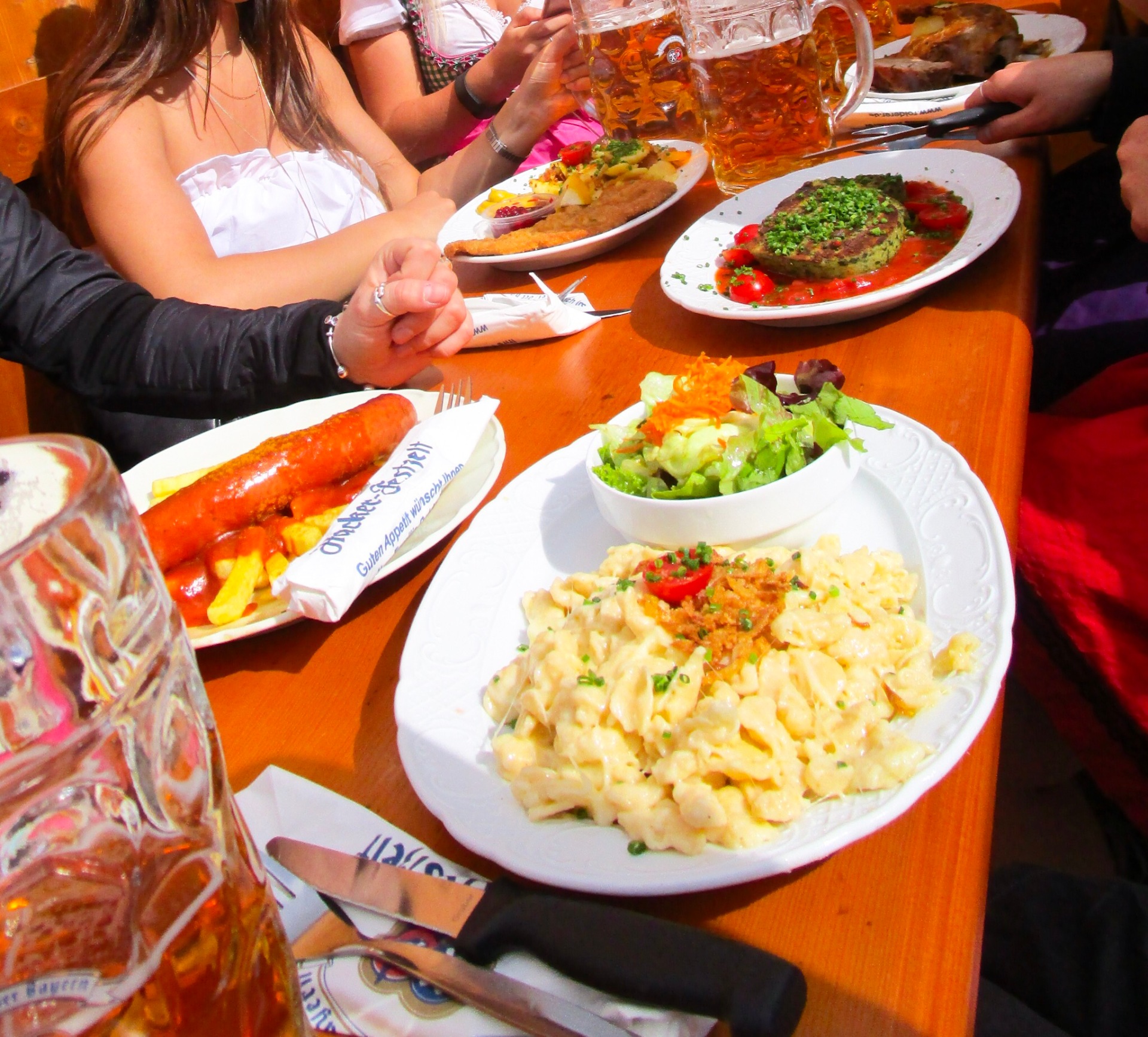 This one’s got a giant lion out the front of it, so you can’t miss it. It’s still a very international tent, and definitely still a big party tent, too. 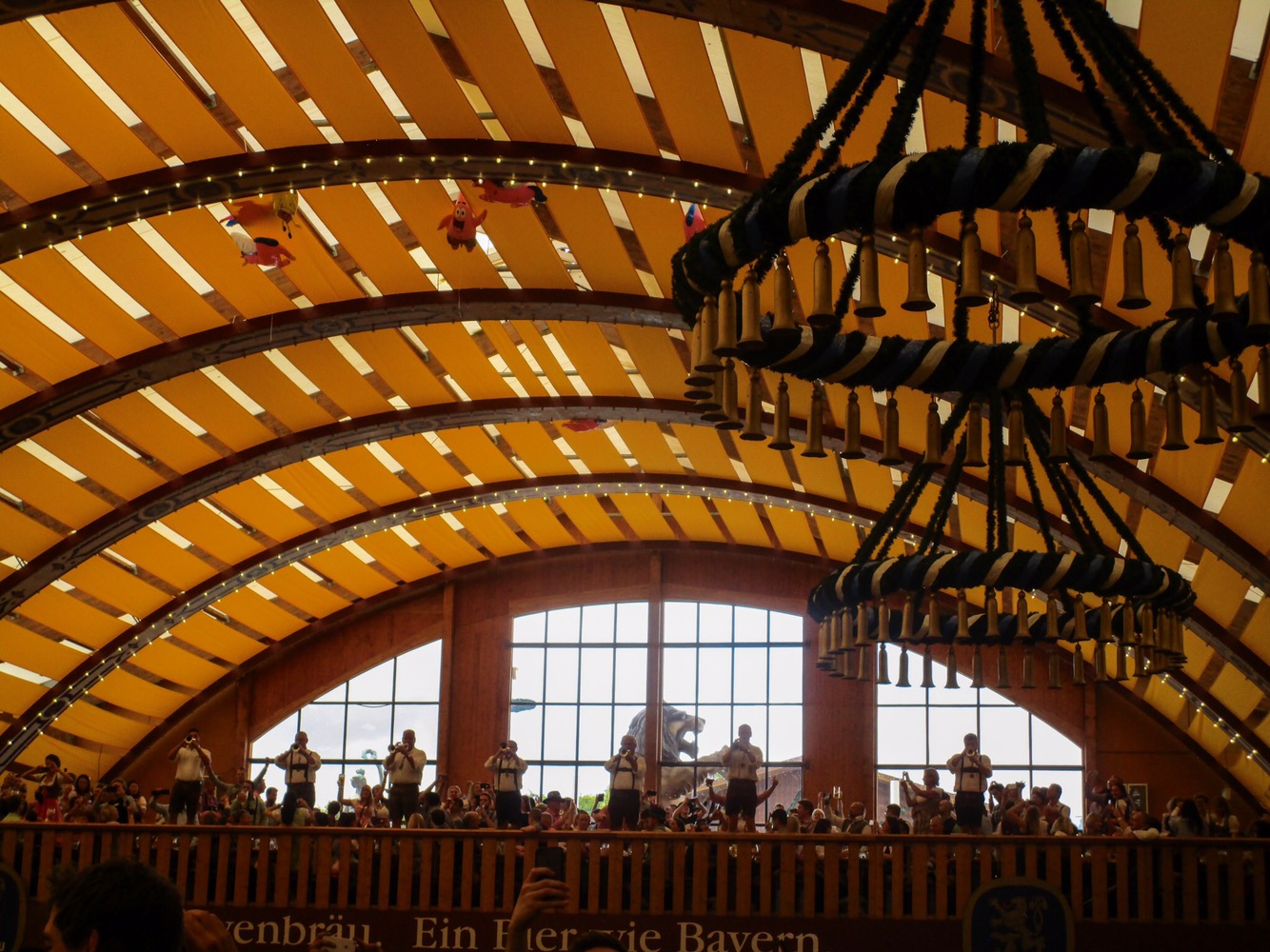 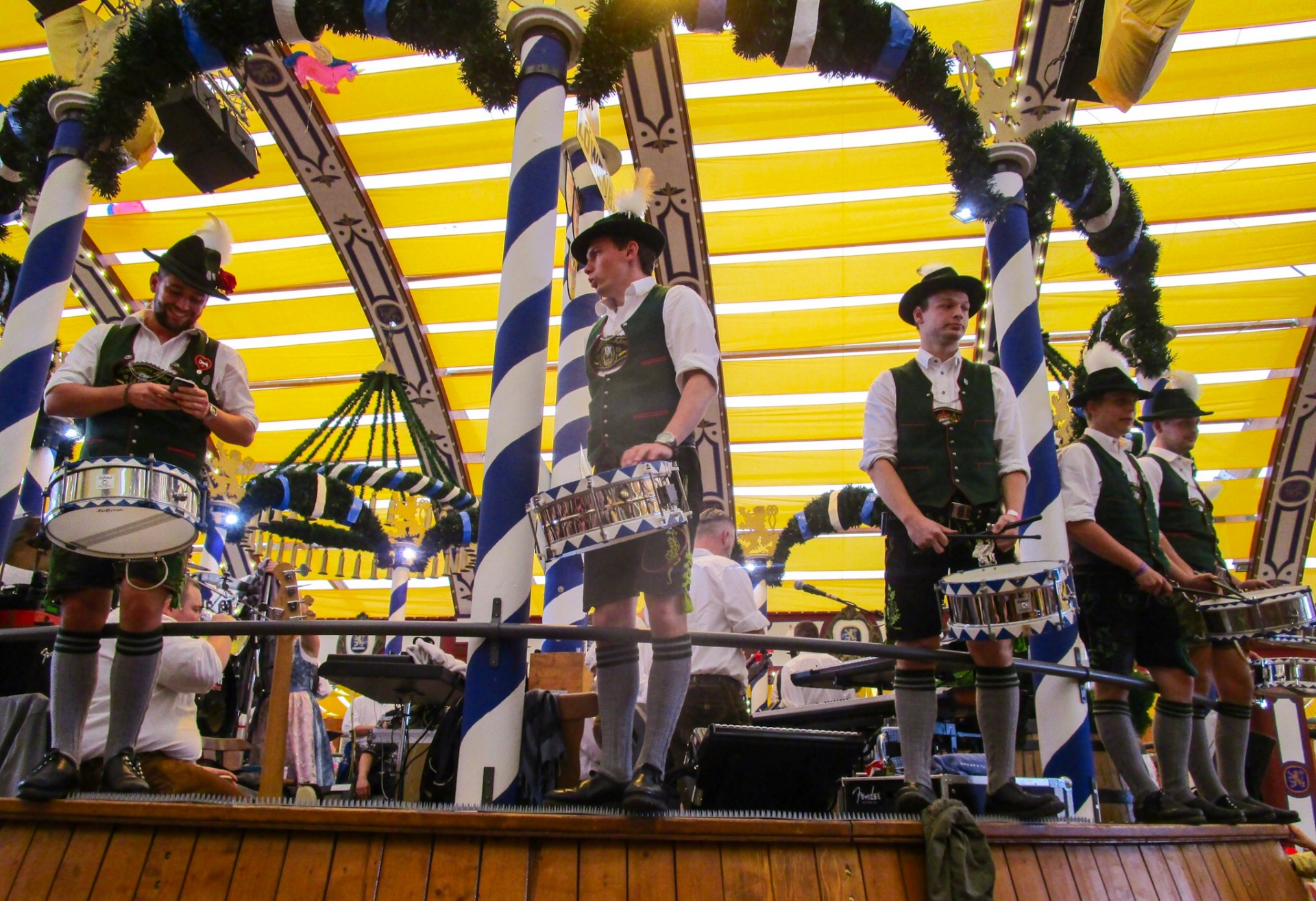 Paulaner apparently has the best beer garden, but sadly when we were there for opening weekend of Oktoberfest it was rainy and cold, so we stayed inside. Another highlight of Paulaner is the giant rotating glass of beer they have. And.. that’s about all I have to say about this one, because I was too drunk when we went there to really take it all in!

Augustiner was described to me by my Munich friend as the “old man tent”. Augustiner is the oldest brew and it’s often considered the best beer, so the traditional Bavarian men love to go here. This one’s got a more earthy, moody vibe inside, too, and not many people were standing on their chairs dancing. But we didn’t stay long, maybe it gets livelier!

If you’re going to Oktoberfest at opening weekend, Schottenhamel is where it all starts. If you want to get into the Schottenhamel for the opening day, you probably need to be queueing up at 5am. The mayor of Munich taps the first keg of the festival at midday, and that’s when the festival starts. 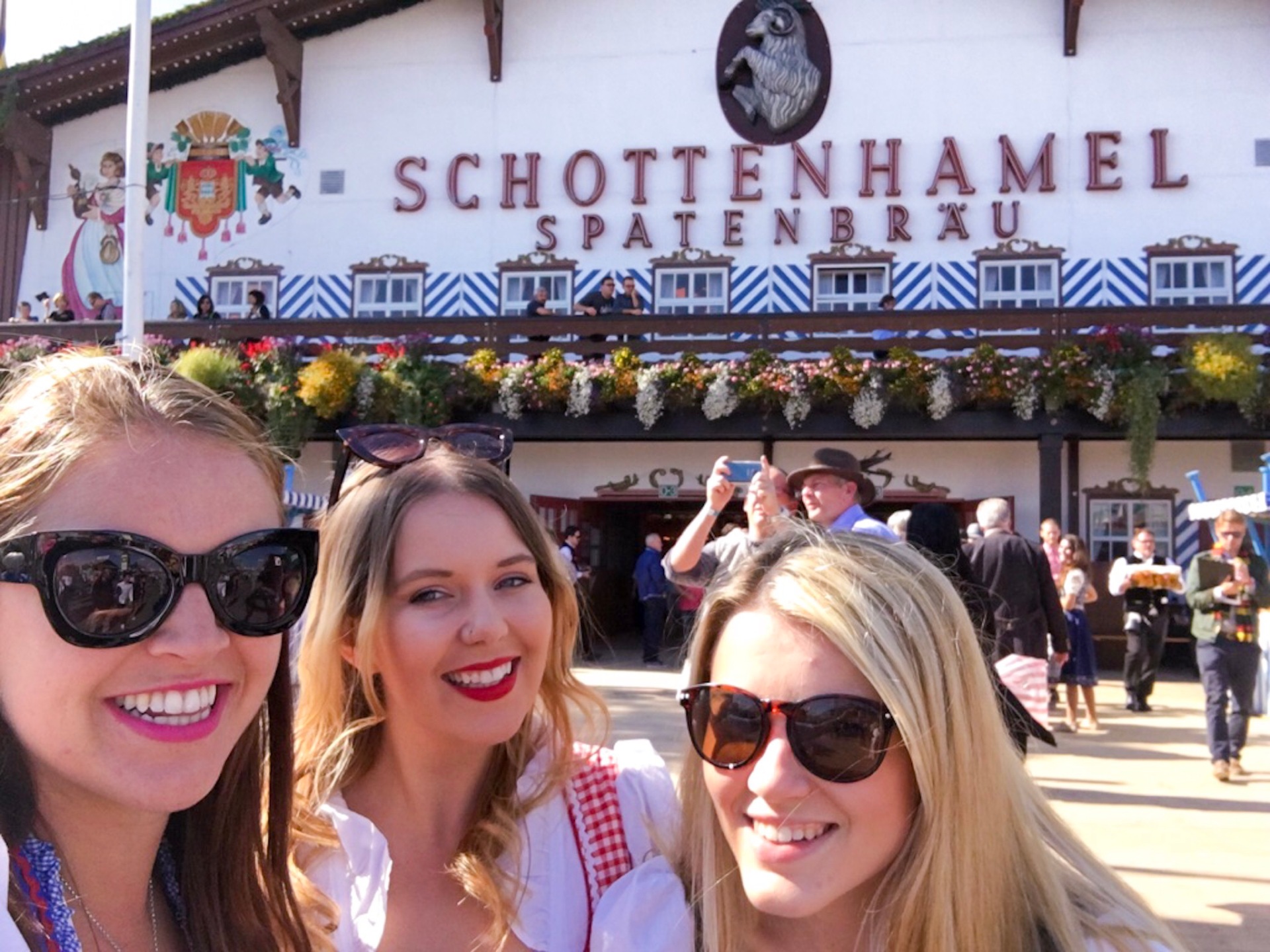 There are a bunch of other tents at Oktoberfest that I didn’t have the time to check out. Another suggestion I have is the different drinking locations around the whole festival, including bars selling Schnapps (so German!). I’d heartily recommend trying tequila with orange and cinnamon (instead of the usual lemon and salt) from one of the Schnapps bars. Maybe not before going on a ride, though! There are gorgeous little beer gardens scattered throughout the festival selling a wider range of drinks, and these are perfect for sunnier days, if you’re looking for a more chill vibe than the main tents. Want more info about Oktoberfest? Check out my guide to Oktoberfest, and read about how early you need to get into the festival to get a table.

One thought on “Top 5 tents at Oktoberfest.”

Don’t you hate when you forget where you parked 🚗
POV: you’re with me at the bookstore and I give you a grumpy look when you tell me I can’t buy ten new books because WE HAVE BOOKS AT HOME
Left the house today. Big day.
This International Women’s Day, ask yourself: is your feminism intersectional?
forgot my book
Winter? I don’t know her
We won the @vegdfood Valentine‘s Day competition and got free burgers so naturally we’re spending our afternoon eating burgers in the tub ✨
Hey friends, I have some news 🍒
Loading Comments...
Comment
×
%d bloggers like this: